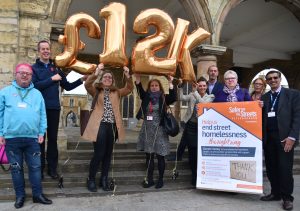 The Safer off the Streets partnership is celebrating its first anniversary and would like to thank members of the public for their support. In one year, over £12,000 has been donated to the partnership to tackle rough sleeping in Peterborough, which has helped support 44 rough sleepers into accommodation.

Launched one year ago on World Homelessness Day (10 October 2018), 19 organisations who provide services to those sleeping on the streets formed a Safer off the Streets Partnership, pledged to work together in a co-ordinated way to help and support rough sleepers off the streets in Peterborough.

For the first time, the public were able to see in one place what support is available and how to help with the launch of a dedicated website www.saferoffthestreets.co.uk.  A contactless donation point outside the Argo Lounge in St Peter’s Arcade, online donations and cash collection boxes were also launched to provide a more constructive way than giving to those begging.

The opening of the Garden House, saw a dedicated centre operated by partnership member Light Project Peterborough, which has provided support and services to 350 vulnerable people in its first year, has received £10,000 of the donations.

The partnership continues to drive forward with their commitment to end street homelessness by:

Christine Graham, chair of the Safer of the Streets Partnership, said “We want to thank members of the public for their support of Safer off the Streets. We know there are many people in the city would are committed in making a difference to others, and with homelessness on the increase nationally, we would ask that they continue to support us through donating to the partnership so we can continue to support homeless people in the city.”

“With the average life expectancy of a homeless person being just 47 years old, Safer off the Street’s aspiration is to end homelessness the right way by providing a safe and secure home rather than helping someone to remain on the street.”

“There is no single reason why someone can end up without a home – it could happen to any one of us.  Many people become homeless because they can no longer afford the rent.  And for many, life events like a relationship breaking down, losing a job, mental or physical health problems, or substance misuse can be the trigger.

2 thoughts on “Safer off the Streets celebrates their first year”

Subscribe to email updates about Safer Off The Streets.